Industrial performance coating for professional application only. Not intended for residential use. 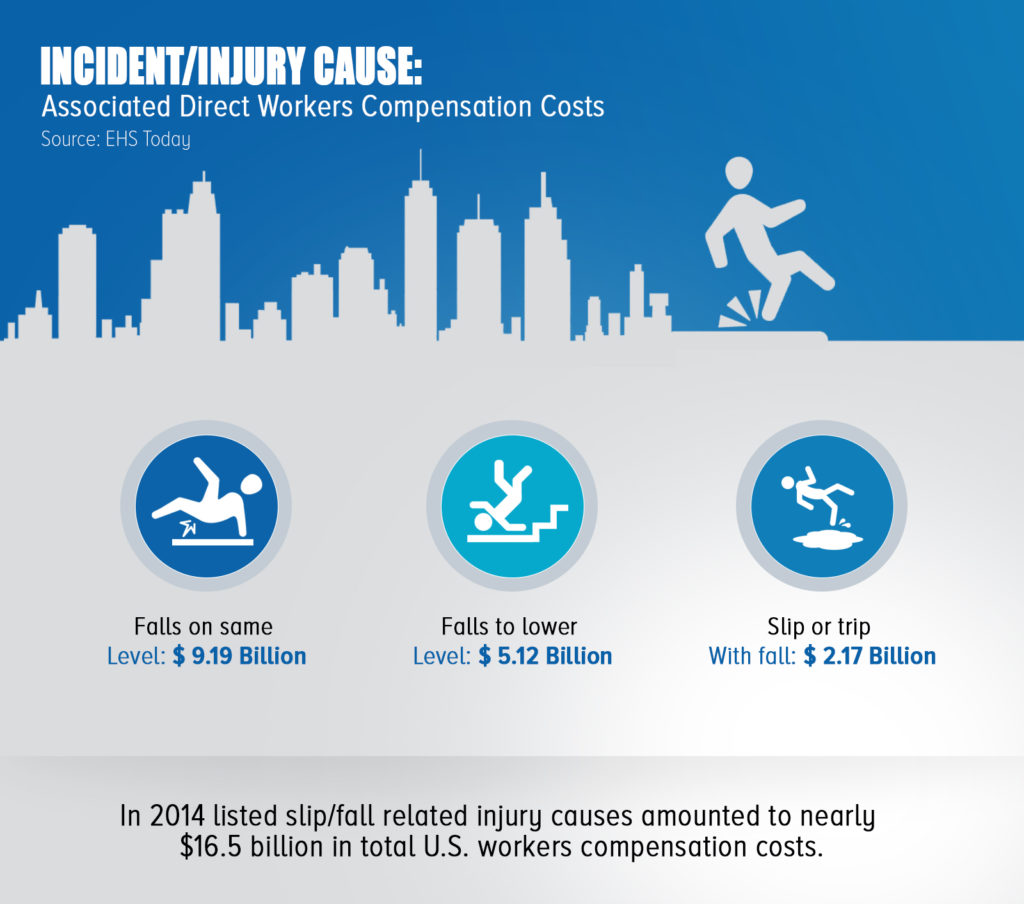 Where Slips and Falls Happen

In establishing standards, codes, regulations regarding slip and fall, the metric know as Coefficient of Friction (COF) is most often mentioned. The coefficient of friction is a measurement of the frictional resistance when an object is subject to a force necessary to either:

Slip-resistant standards and codes have been a moving target over the years. In 1991, the Americans with Disability Act (ADA) recommended a 0.6 SCOF on level surfaces and 0.8 for ramps. But no specific test method was specified. In 2004, the ADA removed those recommendations. ADA now says simply “The surface must be firm, stable, and slip-resistant throughout its lifetime.” In fact, the ADA recommendation was virtually meaningless because there are so many different devices available to measure the SCOF for the same surface with different sensors, geometry, and speed of travel.

Given the shortcomings of the ASTM C-1028 standard, various industry organizations have spent a considerable amount of time and resources to develop a more practical and reliable test method to better indicate what is slip-resistant. As a result, the industry groups have developed new standards to include the Wet Dynamic Coefficient of Friction (DCOF) as the preferred measure of slip resistance. The BOT–3000E digital tribometer has been identified as the preferred measuring device, as it is not subject to human error, it measures both SCOF and DCOF and the results are repeatable on flooring surfaces. A Wet Dynamic Coefficient of Friction of .42 has widely been accepted as the minimum dynamic coefficient of friction to prevent/limit slips on wet surfaces.

The underlying methodologies and the .42 quantitative threshold was derived from years of intensive research in Germany, Great Britain, and other European countries. The European research concluded that even the most vulnerable people could reduce their risk of slipping while walking to 1 in 1,000,000 (or better) when the “available friction” on a level floor-shoe interface met or exceeded DCOF of 0.42. The concept of “available friction” is that, regardless of prevailing conditions (wet, dry, clean, contaminated), the walkway surface should still deliver a certain DCOF to prevent a slip from becoming a slide or possibly a fall. The supporting research was tested over three years by German researchers at university and government labs and the results confirmed the threshold of 0.42 DCOF as the best available standard for Dynamic Coefficient of Friction.

Starting in 2009, more rigorous standards, testing equipment, and procedures were introduced to assist building owners, manufacturers, architects, and specifiers in identifying the slip resistance of a variety of surfaces.

These and other organizations have begun to set standards and guides based on wet SCOF and DCOF values using the BOT–3000E device.

With the development of these industry standards and the acceptance of the BOT–3000E device, the flooring, and related industries now has rigorous procedures and measurement tools that are independent, repeatable, defensible and supported by years of research and testing. Building owners, building operators, the professional design community and their clients have objective studies and information regarding slip resistance of hard flooring surfaces. In addition, the American Institute of Architects (AIA) now includes the ANSI A137.1 standard in Section 093013, Ceramic Tiling, in their AIA MasterSpec.

It is not possible to prevent all slips and falls, as they can be caused by irregular walking surfaces, contaminants, footwear and human error. What is most important is to minimize slip and fall risks through due diligence and the use of best available practices and technology.

Need help or have questions?

We are here to help.

Are You Looking For Documentation:

Don’t See The Information You Are Looking For?